Fun in the sun or sleeplessness and pain?

While Australia is battling wildfires and California is dealing with frost, here in New England we’re dealing with our own weather oddity: warmth.  Last week it was in the 30s.  Later this week it should be in the 30s.  Yesterday and today were in the 50s.  And it was sunny.  Go figure.

I woke up feeling very hot.  I always sleep better in a cool room, and since it was so warm, I’d gone to sleep with both windows 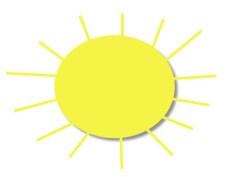 wide open and a fan on, but I was still hot.  I looked at the clock: 4:44am.  Yeah, it really said that.  I was not amused.  I got up to turn up the fan and check that the radiator wasn’t running.  While I was up, I got water.  Then back to bed.  No sleep.  I tried reading for a while.  Lights off.  No sleep.  At 5:37 I finally had a good idea.  Just a couple days ago I was cleaning up my living room and feeling frustrated that there was no good place for the box fan that was in a corner of the room.  I stumbled to the living room, noticing the pain in my foot.  Huh, that wasn’t there when I got water, was it?  I haven’t felt that specific type of pain for a while, probably close to a year.  I got the fan, set it in the far window, and went back to bed.  No sleep.  After a while, I switched the fan to the closer window.  Somewhere around 6:15 I finally fell asleep.

It was a miserable hour and a half.  My mind wasn’t racing.  There was nothing mental or emotional to keep me awake.  I just wasn’t responding well to the temperature.  I noticed pain during that time.  A lot of pain.  But that wasn’t keeping me awake either.  I was too tired.  I’m just glad I was able to sleep eventually, and that I didn’t have to get up early.  It wasn’t as much sleep as I usually get, but it was enough to get through the day.

Too bad the first thing I noticed when I got out of bed this morning (at the more appropriate time of 10:30am) was the pain in my foot.  Then later I noticed the pain in my wrist.  And other areas weren’t feeling too good either.  And I was HOT.  I opened all of the windows in my apartment and that helped.  I wore a t-shirt (in January!)  I wore my cooling neck band and that helped more.  But it wasn’t until the temperature began to drop this afternoon that I started to feel better.

Things are continuing to improve, but I’m still dealing with a lot of extra pain.  I’m at Mother Nature’s mercy, and so far, it’s costing me.

So while everyone else is loving this weather, getting outside without heavy coats, throwing balls and frisbees, taking long walks, and getting some sun, I’m counting down the hours until the cooler weather returns, with the glorious 30-something degree days and even colder nights.  For someone who dislikes winter, I’m really anxious for it to return!

This entry was posted on Monday, January 14th, 2013 at 8:25 pm and is filed under Expectations, Frustration, Isolation, Pain, Rants, Symptoms, Unpredictable. You can follow any responses to this entry through the RSS 2.0 feed. You can leave a response, or trackback from your own site.