Medications: too little science, too much art

What dose should I take? That has never had a clear answer for me.

As a kid in severe pain, the doctors told me to take 3 ibuprofen. They said they wanted me to take 4, but held back because of my size. I was probably around 14 years old then, and under 100 pounds. The thing is, size isn’t the only way to dose a medication. Oops.

As an adult, something slowly became clear: I need small doses of everything. I’m still not a huge person, but I’m certainly well over 100 pounds, and I react strongly to everything. 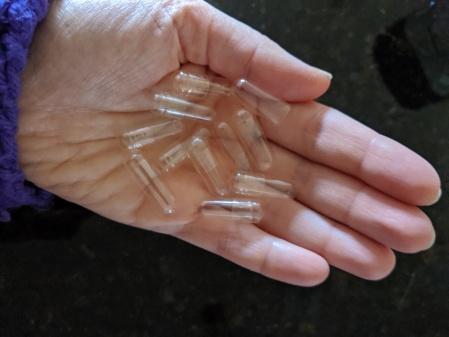 A typical starting dose of melatonin is 1-3 mg. I take 75 mcg! I have empty pill capsules which I use to split capsules that, even at their lowest dose, are too strong for me. I open them up and carefully pour the contents into the empty capsules, dividing each pill into 2 or 3 doses. It’s a pain in the butt, but necessary.

Now I’m taking a compounded hycrocortisone (HC). Since it’s a compound, it’s easy to get any dose I need. You know what isn’t easy? Knowing which dose I need!

A book I trust insists that women should start at 25 mg. Patient groups I trust also say to start at 25-30 mg. My doctor says that 15 mg is the right dose. I started at 15 mg and quickly ramped up to 25 mg. I felt much better. After several months, though, I suddenly gained a lot of weight all at once. My doctor felt it was due to the HC and wants me to lower the dose. Given the way I gained the weight (the timing and location) I have to admit that he’s probably right. I had a few other symptoms, too, which could be related. Still, I was hesitant. I felt good, after all. And while for some medications, blood or other tests will give answers as to a medication’s efficacy and impact, HC messes with adrenal tests and makes the results unreliable. Dosing is based only on symptoms. Oy!

If only there was some way to know what the right dose is!

I decided to lower my dose a bit at least. I went down to 22.5 mg. In less than a week I got my period for the first time in months. I don’t think that was a coincidence. There’s been no change in my weight, but I know from experience that steroidal weight gain is a bitch to reverse, so I’m not expecting it to magically disappear on its own.

I’ve had some other good effects, though. I seem to be sleeping better, and I’m waking up feeling more alert and less fatigued. Hmm. That’s appealing.

The question now is: what do I do next? Do I lower the dose a bit more? Hold it at 22.5 mg because it’s working? Change the timing of the pills? I wish I knew!

Unfortunately, there’s no choice but to experiment. This week I will lower my dose again, down to 20 mg, and see what happens. It might be great. I might feel even better. On the other hand, I could feel a whole lot worse. Unfortunately, there’s absolutely no way to know in advance. I just have to try it.

The inconvenience of diarrhea – even at home

No one likes to talk seriously about poop. It’s something we all* do, yet it’s treated as an unsafe topic. Commercials for diarrhea medications are laughed at by people. Folks snicker at farts. No one feels comfortable on the phone saying, “Hey, let me call you back in a few minutes. I just need to run to the bathroom.”

For most people, it’s easy to avoid the topic. They don’t think about their poop much. But then there are those of us with digestive issues. I talk about poop with a lot of my doctors. Color, size, consistency, frequency, and odor are questioned and explained. I keep an eye on things. For too many years, I didn’t realize how abnormal my bowel movements were. If I had, maybe I could have been diagnosed a lot sooner. If my doctors had asked my questions about it, I’m guessing I would have been diagnosed sooner.

Well, here on Chronic Rants, we talk about poop. And today’s rant is about the inconvenience of diarrhea. I was having a perfectly fine day yesterday. I was being productive around the house. I wasn’t feeling motivated to work on a project that I’ve been trying to get done, but aside from some reduced motivation, everything was normal. I was on track to go out in the afternoon and evening.

In the afternoon I felt off somehow. I’m still not sure how. Maybe a bit low in energy? I decided to stay in for the afternoon and only go out in the evening. My stomach started to feel a bit off. Again, I’m not sure what exactly felt wrong, but something did. I pushed myself to go for a walk. It was a nice walk, with a clear blue sky overhead – a real treat! I stopped to chat with a neighbor and pet her dog for a while. I wasn’t feeling quite right, but I pushed through; at least I was petting a cute dog!

When I said goodbye to the neighbor I continued on my walk in a big loop that would end up at my apartment building. Then I felt that feeling and I knew: I better get home. Quick. I cut back to take a shorter route home. There wasn’t much I could do. I was walking within my apartment complex, so there were no public bathrooms around. I walked faster. I saw a neighbor that I know up ahead. I slowed a bit so we wouldn’t cross paths. I hated to slow, but making small talk would have been worse. I knew I was walking funny, trying to clench certain parts and walked quickly at the same time. I got into my building and felt that bad feeling. I fumbled to open my door. I tore off my coat and rushed to the bathroom. In my anxiety, I fumbled with my pants. I got them down just in time.

I think a few more seconds could have been my downfall. But I made it. Explosive diarrhea isn’t fun, but having it in public and in my pants would have been so much worse.

I felt a bit better after that. I had gotten the bad stuff out of me, whatever that might have been. But here’s the thing: I felt messy. I cleaned my ass area the best that I could, but it wasn’t good enough. I don’t have a bidet. Chances are, I was clean anyway. But I didn’t feel it. So I jumped in the shower. I had already showered that morning. The diarrhea had left me feeling weak and tired. But what else could I do?

I got undressed, then found myself back on the toilet. Eventually I took that shower. The hot water felt great. After a while, I got out, exhausted, but feeling better.

Obviously I wasn’t going out. I couldn’t be sure the diarrhea was over and, even if it was, I was now too weak to go out. I put on super cozy cloths and settled under a warm blanket. I spent the night watching tv and knitting. At some point I wanted food and decided to keep it simple. I cut up some garlic onions, and carrot. I added homemade chicken broth from my freezer. I threw in shredded chicken that I keep in my freezer. I added gluten-free ramen noodles. Voila! An easy home made chicken noodle soup. It was just the right dinner for that kind of night.

I woke up feeling like shit, no pun intended. That diarrhea could have been so much worse. Still, it stopped me from doing so much yesterday, and today as well. It’s frustrating as hell. And it’s not something I can talk about in a socially acceptable way. I can talk about a recent sprain and my friends shower me with sympathy but bring up diarrhea and suddenly I’m persona non grata.

*Folks with colostomy bags still produce feces, though the verb may not apply.