I’ve come up with yet another career plan.  I’ve made so many plans in the last few years.  This one seems as plausible as any… if I go back to work someday.  As my health got worse in recent years, it seemed more and more important to have alternative plans because I knew I couldn’t keep working the way I was.  Then when my health got really bad, I felt too lousy to bother trying to figure out a plan.  And now I’m back to planning. 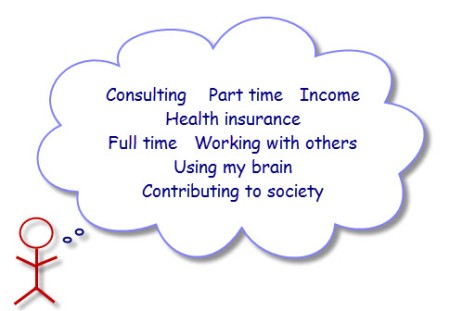 The specific plans don’t matter.  They generally involve consulting in different fields where I have knowledge, part time work in areas that would provide benefits, and jobs in fields that I always found interesting but that won’t take too much extra training.  And they all have something in common: they require me to be in better health before I can attempt any of them.

My naturopath told me yesterday that she thinks it’s a good sign that I’m so antsy to prepare for the future.  I know she’s right.  I’ve been thinking the same thing lately.  When I felt so horrible that reading a chapter in a book was a chore, of course I wasn’t thinking about returning to work.  But now that I’m feeling somewhat better, I’m anxious to feel completely better so I can do more!  It’s a strange in between zone, where my brain is jumping ahead and my body isn’t ready to follow.

Of course, this isn’t just about jobs, but I think that jobs are the easiest thing to focus on.  My friendships are awesome, so there’s no need to work on those.  My family is great, except for the sibling I don’t get along with, so there’s nothing to work on there.  I want a relationship, but that means dating, and more than that, it means being open to being vulnerable.  While my health is stopping me from dating, it’s my past experiences that’s stopping me from being vulnerable.  I’ve been hurt so many times, and I’m not ready to go through that again.  Now that I’m having sex again, I don’t mind waiting to date.  I really want to be able to do more in a day, like get a haircut and see friends and do laundry all in the same day.  I dream about that a bit, but the idea of “more” is so nebulous, and so hard to imagine, that I don’t dwell on it much.  I worked at a job as recently as late 2011, but doing “more” without feeling horrible was a long time ago and it’s harder to remember.  So I think about jobs, careers, possibilities.

And obviously there’s the money part.  I don’t know where I’ll be living in a few months, and it all depends on the insurance appeal decision.  I haven’t been buying new clothes, even new winter socks without holes, because of the money.  I fantasize about being able to buy new slippers without worrying about the money.  So earning an income would be fantastic.

The cognitive aspect is important too.  I miss using my brain.  Of course, I’m still having cognitive problems…. it took me a long time to think of the word “cognitive” as I was starting this paragraph, actually.  But if I can work, then I can use my brain more and give it exercise, and if I’m working then it means that I’m able to use my brain, and how fantastic would that be?

I know that returning to work, to the “normal” world, to the world where I don’t dread the question “what do you do?” is pretty far off.  It could be months, it could be years.  It may never happen.  But right now I’m dreaming.  I’m making plans.  Because if it does happen, I want to be ready.

This entry was posted on Tuesday, January 8th, 2013 at 9:40 pm and is filed under Expectations, Frustration, Isolation, Job, Limitations, Raves, Relationships: Family & Friends & Dating & Sex, Symptoms, Unpredictable. You can follow any responses to this entry through the RSS 2.0 feed. You can leave a response, or trackback from your own site.