Time to mix things up

For many of us here in the United States (though not everyone, since it’s a screwy system) the clocks will “fall back” in a few hours as 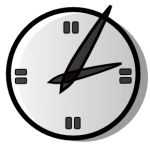 daylight savings time (DST) ends.  Now, it’s not as if those of us with health issues don’t have enough beyond our control to deal with, we have to deal with time changes too.

For some people this really won’t matter at all.  For people whose bodies are sensitive to sunlight, like mine, this is huge.  Yes, I’m the weirdo who flies from Boston to Chicago and the one hour time difference throws me off.  Yes, I travel to California and it takes me three days (at least) to adjust to the time difference.  DST is even worse.  At least when I travel, my schedule changes anyway because, well, I’m not at home.  But with DST I’m home, doing all the things I normally do, but the clocks are off.  I’m hungry at the wrong times.  I have to shift medication times.  And don’t let me get started on the sudden shift in daylight.  For someone with seasonal affective disorder this… well, it sucks.  A lot.

Why do we do this?  Well, it depends on who you ask.  If you read the link above, you’ll see some of the reasons.  Some of it is political, such as saving money by reducing energy costs through cutting down on artificial light.  My favorite (again, that’s sarcasm) is the idea that we should get up at sunrise and go to bed at sunset.  I’m sure that sounds like a great idea if you’re getting 16 hours of daylight.  For those of us who get around 9 hours of daylight in the winter, that’s just ridiculous.  And the powers that be (apparently this is Congress) can arrange DST however they want, but that doesn’t change what time you have to get up for work or get your kids up for school or head to the gym, etc.  The end of DST means that some people will wake up while it’s light out this week while others will be waking up in the dark.

Is it really worth all of this trouble?  I say no.  I’d rather keep DST time all year round, so that we get more daylight in the afternoon and less at night.  Actually, I’d rather spend have the year here in Boston and the other half someplace else, so that I always get at least 14 hours of daylight each day.  Now that sounds fantastic!

In the meantime, I better go change the clocks, adjust med times, and eat a little something extra so I’m not too hungry in the morning.  And maybe I’ll spend a few extra minutes in front of the light box in the morning.

Good luck to you!

This entry was posted on Saturday, November 5th, 2011 at 9:37 pm and is filed under Expectations, Frustration, Limitations, Pain, Politics, Rants, Symptoms, Unpredictable. You can follow any responses to this entry through the RSS 2.0 feed. You can leave a response, or trackback from your own site.