The what-ifs of old medical records

I suppose it’s only human nature to wonder if there was a chance I could have been diagnosed sooner. But when the test results from years ago are staring me in the face, I don’t have to wonder any more.

A couple years ago I began recording all of my lab test results in a spreadsheet. It’s something I’d wanted to do for years, and I finally did it. Now, I can easily sort or filter to see all of my tests from 2013, all of my TSH tests, all of my cholesterol 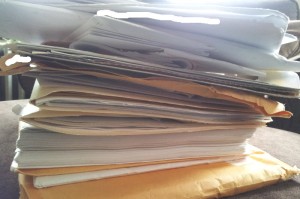 results, etc. Unfortuantely, I was only recording everything from the end of 2012 and forward.

Over the years, I’ve collected quite a pile of medical records. Each new envelope was added to my desk drawer. As I began to fill up a second drawer, I realized I needed to get back that prime space. I decided to box up all of my records and store the box away in a corner or a in closet.

Now that I have a spreadsheet of lab results, it feels wasteful to put records in a box without reviewing them first. So as I add each record to the box, I look at it. If there’s anything relevant (or at least, currently relevant to my untrained eye) then I add that to my spreadsheet. I’ve been recording lab results, but I’m also recording other useful information, like names of doctors. I’ve forgotten many of them over the years, and one day it might be useful to know which doctors I’ve seen. Almost as useful as knowing my old test results!

The first time I was diagnosed with an autoimmune condition was when I was 23. At that point, I’d had symptoms for 11 years. I was diagnosed based on a high ANA (anti-nuclear antibody) test. The doctor I saw wasn’t in the same network as all

of the previous doctors, so the only records he had were the stack I handed him. He didn’t see anything on a computer or talk to anyone. That’s probably why he was able to start fresh. He ran the test. But when he looked back through my records, he saw two previous ANA tests that were high. They weren’t high enough for a diagnosis, but they were high enough that someone should have been keeping an eye on them. And yet no one ever mentioned it to me! So what else was missed?

As I’ve been looking at my records, it’s horrifying to see the many missed opportunities. But last night really got me. I was glancing at some test results from 2007, passing over the normal blood counts, mentally noting the high triglycerides (which I’d had for many years, so that was no surprise,) when I noticed two shocking test results.

The first shocking result was my TSH. It was tested 4 times in 2007. Each test was done at the same lab, with a normal range of 0.270-4.20. The normal range is different now, but that was what the lab used back then. My results were, in order: 4.890, < 0.014, 1.030, 3.860. Yikes! That second number was at a dangerously low level, but no one ever mentioned that to me. They probably adjusted my medication after the first test, which was high, and my TSH dropped too much. The second test was way too low, so they adjusted it again. The third test was done just a month after the second, so it was too soon to know anything. The last one was within the “normal” range, but for someone with hypothyroid it was too high. Given these results, it’s shocking I wasn’t even sicker than I already was! And it’s disturbing that over a year after being diagnosed as hypothyroid, my TSH was ever allowed to reach 4.890 to begin with.

The second shocking result was also shocking for the test itself. Apparently, back in 2007 I had a 24 hour urinary cortisol test done. I didn’t know! I wonder which indicators caused my doctor to run that test? I’m sure I have a record with her notes about that, but I’m not organized enough yet to know where it is. I bet it would be relevant, though. And of course even more relevant are the results! They would have been good to know in 2012 when I was out of work, feeling lousy, and dealing with a doctor who didn’t believe I had a cortisol issue. Because the thing is, even back in 2007 my cortisol was too low! It was 0.61, only slightly below the normal range of 0.63-2.50. Still, cortisol shouldn’t be at the lower end of the range, much less below it, and I had the symptoms of cortisol problems along with chronic pain and hypothyroid, which can both contribute to cortisol problems. And yet it wasn’t addressed. Or mentioned. At all. And so it was another 5 years before I found out I had adrenal insufficiency. By then, things had gotten worse. That’s obvious from both the test results and from how I felt.

Even if all of my health problems were caught earlier, I’d still have autoimmune conditions. I would always have Hashimoto’s Disease and hypothyroid. That wouldn’t have changed. But if I’d known then what I know now, if the doctors had addressed these issues back then, so much would have been different. The adrenal problems could have been addressed before they turned into adrenal insufficiency. The Hashimoto’s could have been addressed before so much of my thyroid was destroyed. I might never have suffered such debilitating fatigue. I might never have had to leave my job. I might not now be on Social Security and unable to work. I might not have gone through the stress, emotional upheaval, and bullying of navigating long term disability insurance, social security, and MassHealth. I might not have had the financial strain of the past several years.

And you know the worst part of all? Those “mights” are really “likely.” Because chances are, a lot of my small problems in 2007 could have been prevented from becoming big problems in 2014. And that is a personal tragedy. That is a failure of many doctors and of our medical system in general. And that is a harsh reminder that no one will ever care more about my health than I do, and so I must continue to do my own research, review all of my own test results, and question everything. The doctors might not like it but if they complain, I’ll just point out the dozens of mistakes that have already been made in my care. And if they still don’t like it, I’ll find others. Because my health is too damn important to allow these travesties to happen again.

This entry was posted on Tuesday, July 29th, 2014 at 10:50 pm and is filed under Educating, Expectations, Fatigue, Frustration, Healthcare, Isolation, Limitations, Medication, Pain, Rants, Symptoms. You can follow any responses to this entry through the RSS 2.0 feed. You can leave a response, or trackback from your own site.

13 Responses to The what-ifs of old medical records