The “Is it worth it?” analysis

I went dancing! I haven’t been dancing in ages, and I hadn’t planned on going any time soon. But there was a street party and it looked awesome and I was with friends…. so why not? And when I say “street party” I mean a serious street party. A 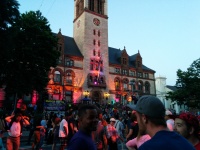 major road was blocked off. There were spotlights on roofs and funky colors displayed on city hall. The music ranged from club remixes to motown to disco to whatever else you can dance to. There were congo lines in the street. A beach ball was being tossed around through the crowd. And the weather was cool and pleasant and I felt decent. So why not?

Well, I’ll tell you why not. Because pain. Because fatigue. Because sick body. Yeah, that.

But it looked like so much fun! So I asked myself, “Is this worth it?” And then I continued to ask myself that question every five minutes for the next 2 hours. Sometimes I came close to going home, but then I decided it was worth staying. The question wasn’t whether or not I’d feel horrible later or the next day. I knew I would. There was no question about that. But if I never did anything that made my symptoms worse, I’d never do much of anything (including typing this right now.) Some things aren’t worth the extra pain, fatigue, nausea, etc., but some are. And this was.

The “Is It Worth It?” Graph

At a certain point, I knew I was reaching that point where it wasn’t worth it anymore, so I headed home. The fallout wasn’t too bad. I felt lousy the next day, but not as horrible as I’d have expected. I’m still recovering, but it’s going well. And I have no doubt: it was totally worth it!

This entry was posted on Sunday, June 29th, 2014 at 11:56 am and is filed under Decisions, Expectations, Fatigue, Limitations, Milestones, Raves, Symptoms, Unpredictable. You can follow any responses to this entry through the RSS 2.0 feed. You can leave a response, or trackback from your own site.

10 Responses to The “Is it worth it?” analysis