It started like any other day. I ate, read, dressed, ate again. I went to an appointment. And that’s where it started getting weird. A medical practitioner was pushing me to open up about some things that I usually don’t talk about and I got a bit teary. Ok, that’s not too unusual for me. Then I started crying. That’s a bit odd. Then when I left, I sobbed uncontrollably 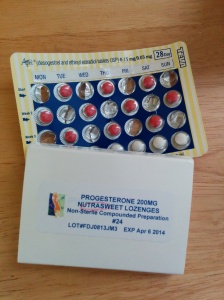 for a while. That’s completely out of character.

What was going on? I called a friend and we chatted for an hour. Usually I find crying to be cathartic, so after crying and then talking to a close friend, I should have been feeling much better. Instead, I continued to feel overwhelmed, ashamed, and depressed. When I was still feeling that way at 10pm, I knew something was wrong. When I woke up the next day still feeling that way, I knew there was definitely a problem. Luckily, I quickly figured out what it was.

About 8 or 9 years ago, my endocrinologist put me on natural replacement progesterone to help my PCOS (polycystic ovary syndrome.) This worked out fine for a bit, but then about 5 or 6 years ago I started having PMDD (premenstrual dysphoric disorder.) My doctor had me change birth control pills. It took some time, but we finally figured out what worked. Over time that’s changed, and each time I had to deal with a roller coaster of emotions when PMDD reared its ugly head. Most recently we found that taking half a pill of a certain brand was perfect for me, and of course I continued with the progesterone, too.

With all these hormones, you’d think I’d have regular periods, right? Well, I did for a while. But then recently I was only spotting at that time of the month. Then I didn’t get a period at all. Hmm. There are a couple different things that can cause this, and the only way to find out what’s happening without going off my meds is to do a pelvic ultrasound. Obviously, I don’t want that. So I’m took a leap and went off my meds.

The first 7 days were fine. But then on day 8, when I found myself sobbing, I should have known. On day 9 it was obvious. And now, on day 10, I’m doing much better. Then again, I’m in too much pain to be thinking about anything else anyway. And while being so overwhelmed and depressed felt horrible, it’s a relief to know I won’t be feeling that way long term. If it continues, I’ll just go back on the hormones.

I’ve always been so grateful that I don’t have depression as one of the symptoms of my illnesses. There are usually two types of depression, at least that I know of. One type is a physiological matter. Brain chemicals are off, or the cells aren’t absorbing hormones, etc. The second kind is what you’d expect from someone suffering from daily pain, spending days stuck indoors, unable to work, unable to socialize, etc. I do have that second kind sometimes, but it’s not too severe and it doesn’t last too long, usually just for a couple of days when my physical symptoms are at their worst. I’ve been so grateful for that. And then the other day was a reminder of what I could be dealing with.

And that makes me wonder how many people, especially women, are in the same situation I could have been in. How many are put on antidepressants, when some added estrogen is all they need? How many women spend years in therapy without improving, without realizing that their symptoms get worse approximately every 28 days? How many women and men see a psychiatrist when they should be seeing an endocrinologist? Maybe the answer is that only a few are affected this way. Maybe it’s a lot. I have no idea if this has been studied are not. I just know that a lot of patients fall through the cracks in other areas, so it wouldn’t surprise me if it happened here, too.

I have fallen through many, many medical cracks. Anyone following this blog for a while knows a few of them, but I doubt I’ve even covered all of them at this point. For example, a specialist seeing me for something else once suggested I could have PCOS, but wasn’t allowed to treat me for it because of HMO rules. My own doctor didn’t address it. It took another 7 years for me to actually get diagnosed and treated. I’m so glad I didn’t fall through the cracks with the PMDD and depression. I just hope the medical community doesn’t let it happen to others.

This entry was posted on Wednesday, March 12th, 2014 at 3:42 pm and is filed under Educating, Frustration, Healthcare, Limitations, Medication, Symptoms, Unpredictable. You can follow any responses to this entry through the RSS 2.0 feed. You can leave a response, or trackback from your own site.