I’m no scientist but you can look it up yourself

I’m not kidding. This happens all the time. I have no idea why. A friend who’s vegetarian won’t eat marshmallows. She told me there’s animal fat or something in it (I forget exactly what.) I accepted it. I didn’t ask why they use 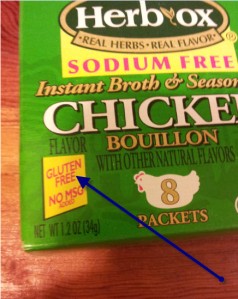 those fats in marshmallows. And yet, people ask me about gluten constantly.

Last week, for example, I went to a small gathering with friends. As usual, M cooked. As usual, I brought my own food. M reviewed what was in the food for the sake of the others, then mentioned how glad she was that I bring my own food, just in case. I’m glad she appreciates it!

Later we were talking about the food, and I took some of the plain steamed veggies. I mentioned how they were the only thing of hers I could eat. M pointed out that I could eat the mashed potatoes, but I pointed out that she’d said earlier it had vegetable broth in it, and that store-bought broth almost always has gluten. She was surprised. Then, I kid you not, M’s wife

looked right at me and asked, “Why do they put gluten in broth?” I told her I didn’t know and quickly changed the subject. I mean, I didn’t make the broth! How the hell should I know why gluten is in it? Why should I care? And yet people ask me that all the time! Like a couple weeks ago when I said I couldn’t eat Chinese food because of the soy sauce, and my friend asked me why there’s gluten in soy sauce. Again, how the hell should I know?

So to be clear, I don’t give a flying fuck why there’s gluten in broth, soy sauce, some vinegars, salad dressings, or a bunch of other unexpected places. I just know there is. I just know what I need to avoid in order to protect my health. What’s important is that gluten can trigger an autoimmune response, which is why I spend extra time and effort to buy gluten-free versions. I just barely know what it does to my body. I don’t know or care what it does to food. So if you care, you can go find out for yourself.

And that will be my response from now on. The next time someone asks me why a food contains gluten, what it’s purpose is, I will tell them that I’m no scientist, but they are welcome to look it up and let me know. Then I will walk away. It’s just not worth my limited energy to deal with those absurd questions.

This entry was posted on Wednesday, September 11th, 2013 at 9:07 pm and is filed under Educating, Frustration, Insensitive, Rants. You can follow any responses to this entry through the RSS 2.0 feed. You can leave a response, or trackback from your own site.