The eny, meeny, miny, moe method of choosing a treatment

When a doctor presents multiple treatment options, my favorite question to ask is, “If I were your 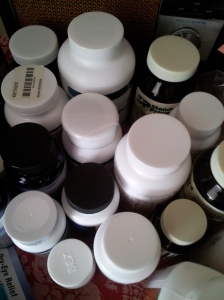 sister/daughter/best friend, what would you suggest I do?” This usually makes them stop and think about things in a slightly different way. I preface it by saying that I know it’s ultimately my own decision and I won’t hold them to whatever they say. This has produced some interesting responses over the years.

Right now, though, that isn’t working. Right now I’m choosing among treatments in different specialties, so there’s no one doctor (that I know of) who’s familiar with all of them. I did ask the hematologist this question yesterday, which is how I decided to do iron infusions. But maybe I shouldn’t? Another doctor prescribed hydrocortisone (HC) for my adrenal insufficiency but my naturopath thinks I should keep taking Isocort. That doc isn’t familiar with Isocort. But then, I’ve also received a new thyroid-related prescription, NDT. I can’t do all of these at once, and maybe I shouldn’t do all of them at all!

It’s generally agreed that the thyroid can’t heal until the adrenals are properly supported, so if I’m going to do the HC then I need to do that before the NDT. Some say NDT won’t work if the patient is iron-deficient, so I guess I’d have to do that first. But again, that’s if I do these treatments at all. They all have risks of side effects. What if I do the iron infusions first and have some bad effect and it takes me a long time to recover, and that makes me put off the HC and NDT, which are both promising? Of course, the HC has lots of potential side effects that I’d really rather avoid, too.

It’s overwhelming. This is my body. This is my health. This is my life. I don’t want to fuck around here. It’s too important to just randomly guess. And yet, sometimes I feel like that’s all I’m doing anyway. Right now I’m looking at three new treatments. Those are in addition to my current supplements and my complicated diet. Maybe one or more of them will work. Maybe they’ll make me better. Maybe they’ll make me worse. But I have to try, right? Yes, I have to at least try.

This entry was posted on Friday, August 9th, 2013 at 8:45 pm and is filed under Decisions, Fatigue, Frustration, Healthcare, Medication, Pain, Rants, Symptoms. You can follow any responses to this entry through the RSS 2.0 feed. You can leave a response, or trackback from your own site.