There is a stereotype of people with chronic illnesses sitting on the couch or lying in bed and watching tv all day long. That’s it. They don’t do anything else.

Is this true for everyone? NO! DEFINITELY NOT!

Is this true for some people? YES! OF COURSE!

The point? Don’t generalize. Just because something is true for some people doesn’t mean it’s true for everyone. Do some gay 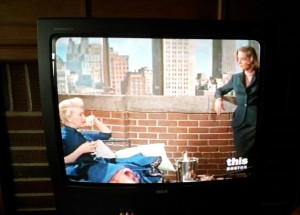 I’ve encountered this stereotype a lot. Of course, it doesn’t just apply to ill people who don’t work. I’ve seen it applied to all people who don’t work. When I quit my job several years ago, people kept asking me what I did all day. Apparently they lacked the imagination or interests to figure out what anyone could possibly do besides work at a job for those extra 40+ hours a week. The truth was, I was incredibly busy. People were shocked to hear that I was watching less tv than ever before, and I’d had to stop watching some shows altogether because I just didn’t have time. What did I do? I hung out with other unemployed friends (this was at the height of the recession, so there were several to hang out with.) I read a lot. I exercised regularly. I learned to cook. I started some interesting new projects. I volunteered twice a week at a nonprofit. I socialized a lot more – I rested during the day so I could go out at night, even several nights in a row. I did laundry, cooking, grocery shopping, and other chores on weekdays so I could go out with friends on weekends. I slept healthy amounts every night. I did my physical therapy nearly every day. When I found time, I squeezed in looking for a new job. It was a fun, busy time, and I loved it all. Who had time to watch tv? Not me.

Of course, being out of work this time around is completely different. I don’t have the energy for most of those things. I have entire days where I don’t leave the house. So I have to find other ways to fill my days.

For starters, each thing I do takes longer than it used to. Taking a shower and getting dressed takes a while. Cooking takes a while. Doing dishes takes a while. I also have to cook a lot more than I used to, since I’m not eating any processed foods. In between those at-home activities, I do leave the house. My friends are all working now, but during the day I can visit with relatives who aren’t working. Or I buy groceries. I do laundry. And I read. I read a lot. I read a lot every day and that’s what I spend most of my time doing. And yes, I do watch a lot of tv. I’ve noticed that the amount of tv I watch is directly proportional to my cognitive problems. When I have good focus and my mind is working properly, I don’t watch much tv at all. When things are fuzzy, I watch more.

This is why on a typical day at home, I watch an hour or so of tv while I eat lunch, then shut it off. It comes back on while I eat dinner. If I feel clear-headed, I usually have no patience for tv and I’d rather be doing something mentally active, so I shut it off after I eat. If I’m tired or not thinking clearly, I watch until bedtime, which could be several hours. This is also why I watch almost non-stop during my waking hours when I have a fever; I just don’t have the focus to do anything else. When I get sick of watching tv then I know the fever is breaking and I’m getting better.

On Saturday I had a lovely day. I rested all morning and early afternoon. In the late afternoon I played with my friend’s kids, chatted with my friend, helped get the kids to bed, then played board games. And since then I’ve been paying the price. It started with some fatigue on Sunday afternoon. By yesterday, I felt really crappy. I’ve had a sore throat since then, so I think my thyroid is enlarged. And I feel fuzzy-headed. I spent a lot of yesterday watching tv. I tried to read in the afternoon, but I read the same paragraph 5 times before giving up. Then I took a nap. And then I watched more tv. It was a miserable day. I composed a version of this post in my head, but didn’t have the energy or desire to type it out. I felt lousy and just wanted to ignore everything. Checking Facebook or reading a blog seemed to take too much effort. Tv is easy. It’s passive. And it was perfect.

Today is a mix. I watched for a couple hours around lunchtime before shutting it off. But when I tried to read, I only got through a few paragraphs and I just didn’t feel like I was following along. I managed to participate in the HAchat today, and now I’m typing this, so maybe I’m getting better. I hope so. But then, I’ve had to retype words over and over to get them right. It’s hard to compose sentences. So who knows. I haven’t left the house in over 48 hours and it’s a bit much. I could use to buy groceries. (A downside to living alone is having no one to get food when you feel like crap.) But I probably shouldn’t drive at this point, and I’m definitely not up to walking. Maybe tomorrow.

This entry was posted on Tuesday, February 26th, 2013 at 4:43 pm and is filed under Educating, Fatigue, Frustration, Insensitive, Isolation, Limitations, Rants, Symptoms. You can follow any responses to this entry through the RSS 2.0 feed. You can leave a response, or trackback from your own site.